Today is the day. The game I’ve been working on for the last 6 months gets released on iOS as a universal app. Monstaaa! is finally available on the Apple App Store! Yeah!!!

Now, here is the summary of my indie game development adventures over the past months that led to this moment. If you’re thinking of going indie, especially with mobile game development in mind, you might find here some useful tips. 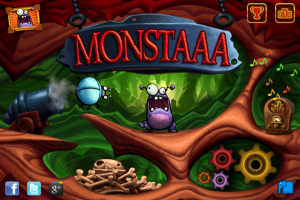 But first off let me introduce yourself a little bit to the game.

If you haven’t heard of Monstaaa! – it is a unique take on physics based puzzle games in that it uses tilt controls to modify the gravity. The goal is really simple – just feed the Monstaaa with all delicious bugs that you can see on screen. As you tilt your device the bugs fall into, always hungry, Monstaaa’s mouth. Getting any of the bugs killed in any way (and there’s many ways!) makes Monstaaa sad, so you better take good care of them!

I believe the game has got some really original base concept, is fun to play and looks good but the way it usually works is it’s up to everyone else to really prove it 🙂 If you’re still wondering what it is, here’s Monstaaa! in action including footage with the actual device:

Before going indie, I had spent 4 years at Blue Tongue working as an engine/technology programmer. It was a great time to be working on big games, I really enjoyed it, but when last year THQ shut down my studio I wasn’t upset at all. In fact I already knew what my next job was going to be. For me, this was perfect opportunity to try indie game development, something I’ve been dreaming of for the last few years. However, being just an engine programmer on console and PC projects for the last 7+ years it was a big challenge for me to switch to managing the whole game production myself – from game design and artwork, through programming, to publishing, marketing and website design.

Developers from big companies becoming indie developers is something we got used to hear about frequently lately. But how many actually succeed? And for me, the most important question was simple – am I going to make living off of that? I guess we’ll see in just few days 😀

I gave myself up to one year to develop and publish one mobile game (though I ended up making two!). From the very beginning I set aside a very limited budget for any, strictly game development related, expenses I might have. Now, Monstaaa! has just been published and to this date I spent just above AU $10k on everything, including company set up, accountant, insurance, developer accounts, software, hardware, art and audio – everything. Does this sound like very little money to make this kind of game? Well, I think it really does!

Having hard limits for time and money I could spend on the project made both myself and my wife feel more secure because if it wouldn’t work it wouldn’t be that big drama – I’d simply start looking for another job. But even in the case of financial failure it would still be, and it was I tell you, a great experience. 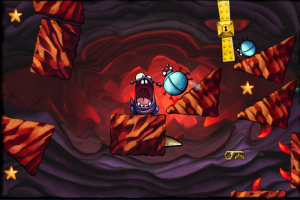 When you’re working solo on a game no one tells you what or how to do anything. It’s just you who makes all of the decisions on the project – whether it’s an important high level design thing or just a not-so-important button color in some menu screen. Decision making is a critical skill one learns they need to use all the time when working for themselves.

With anything I did on this project I tried to make sure that my precious time wasn’t being wasted. I was totally new to mobile game development at the time and I knew there was a lot to learn for me and a lot of mistakes to be made. Realizing things never work out perfectly the first time I tried to minimize them as much as possible. My way of doing so was by making and publishing some very small game first. For me this was one of the best decisions!

By making simple game one learns a lot. I spent just 1 month developing small puzzle game called Puzzled Rabbit which was then published on a number of platforms including iOS and Android. The game wasn’t financial success at all but I still consider it a big success overall – I learned a lot about mobile development while making it and as a result I was in a much more comfortable situation when starting works on a larger game being Monstaaa!

Figuring out what technology to use took me some time – see my previous post – and I eventually happily decided to use Marmalade SDK. Again, without making a small game first, it would have been much more painful process.

Using Marmalade I was able to develop 95% of Monstaaa!. The remaining 5% went into implementing iOS specific features not present in the SDK like iCloud support. The cool thing about using Marmalade was I could test the game on PC in a simulator and I could make iOS builds right on my PC without even requiring Mac. Also, being able to use Visual Studio was a big thing for me – someone who’s been using it for 10+ years.

Turns out, unless you want to take advantage of some fancy iOS features, iOS game development is perfectly possible on Windows. Good news for many! But the feature that made me love Marmalade is its support for multiple platforms – in fact Android version of Monstaaa! is already mostly working without any extra effort.

I could have gone a different route of developing the game using native iOS or Android SDKs but getting familiar with them would take a lot of my precious development time. With Marmalade I could focus more on the actual game so, overall, I think using it was my second good decision.

My future blog posts on Monstaaa! will include promotion and launch summary, sales analysis, post-mortem of working with artists, iOS & Android technology tips and more cool stuff. Make sure to check back soon or simply subscribe to my blog!

EDIT: Part 2 of the Monstaaa! development summary is here.